‘Relax, you’re in paradise’ has never rung truer. One of the Cyclades islands in the Aegean Sea, Santorini is a gilded place allowing for beautiful sunset viewings, ancient ruins and whitewashed towns.

The present-day crescent shape of the island is a consequence of a massive volcanic eruption in 1450 BC, which caused the middle of the isle to fall into the sea.

Leaving a steep-edged crater known as a caldera peeping above the waves, it feed the myth of the lost Atlantis.

Thira is the official name, while Santorini is actually more of a nickname. Its capital is Fira – not to be confused with Thira!

Carry on reading for our ‘best bits’ guide to the island.

Note: You cannot drink the tap water in Santorini. You must buy bottled water. Typically, a bottle costs 50 cents.

Ferry: Santorini is about 120 miles from Athens but you can catch a high speed ferry that takes around 5 hours. A Blue Star ferry going between Athens and Santorini departs daily, usually leaving Athens at 7:30am.

Ferries depart from the Piraeus ferry port located 20 minutes by train outside of central Athens, and arrive in Santorini at the Athinios port, 15 minutes from the town of Fira.

FerryHopper.com is the best place to search for ferry routes and times.

Plane: For the months June to September, there are over 15 flights per day departing from Athens International Airport. The primary airlines for the Athens-Santorini route are Ryan Air, EasyJet, Aegean Airlines, and Olympic Air. The flight that takes around 25-30 minutes.

Catching a bus: Santorini’s local buses are called ‘KTEL Buses’ and operate all months of the year.

Buses are easy to catch in Greece and you pay on board. You don’t pay the driver. A conductor will come round to collect money and issue you a ticket.

Buses can be delayed and might not always leave on time.

All local buses have Fira town as the main hub. All buses depart from and finish their route there. 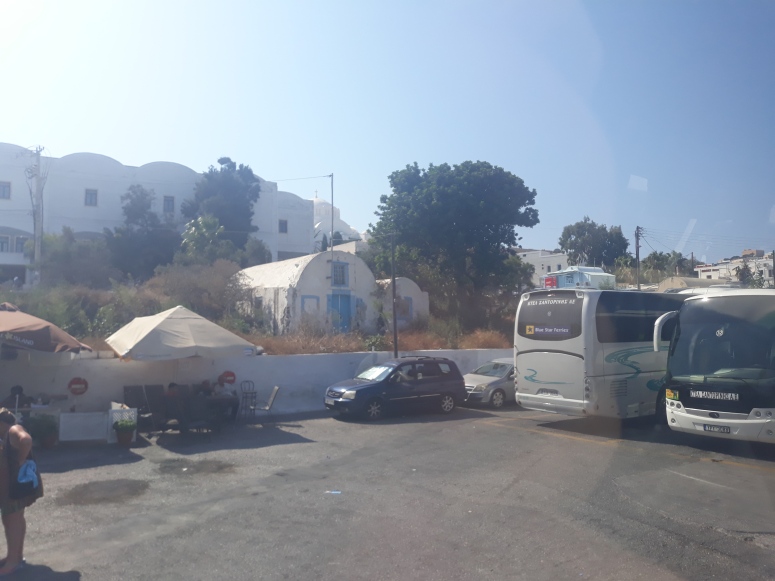 Tip: Fira’s bus station can be a little chaotic, but if you need to know the bus number/destination, head to the booth by the station’s entrance where someone will be able to point you to the correct bus. There isn’t really a queuing system, so be prepared to push your way in.

Taxi: From Fira to the airport is a 10 min drive. A taxi shouldn’t charge you more than €20.

From Athinios Ferry Port to Fira is a 20 min drive and the taxi should charge you about €15-20.

There are no taxi meters and fares are fixed, so always ask in advance what the price will be.

Quadbike: Hiring a quadbike or scooter is a great way to tour the island. All you need is a driving licence. The hire of a quad costs around €40.00 for 24 hours. Remember in Greece they drive on the right side of the road.

The capital of Santorini, Fira is located in the western edge of the island, opposite the volcano and the two volcanic islands, Palaia Kammeni and Nea Kammeni that lie in the sea.

It is a great hub for nightlife, cafes, bars and restaurants that boast amazing coastal views and on the caldera side, you get one of the best views of the island.

The main two shopping areas on Santorini are Fira and Oia. 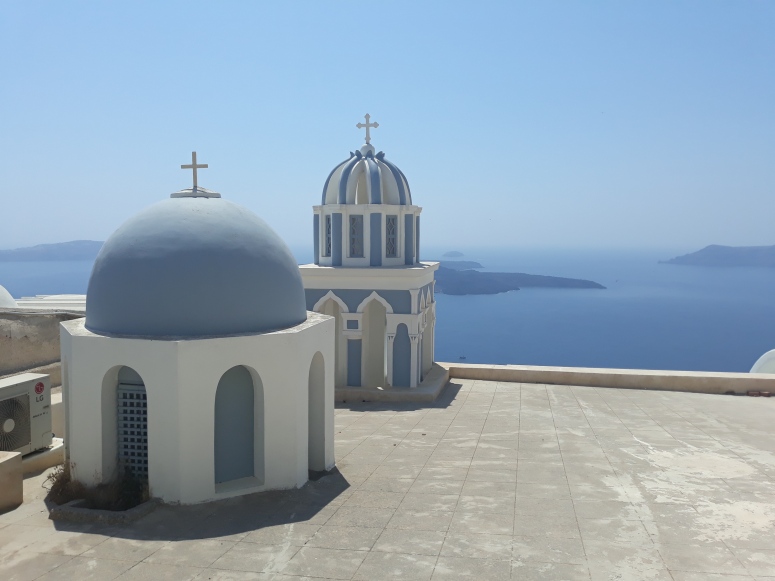 Many people stop for a visit at the Santorini Archaeological Museum, which contains artefacts mostly from ancient Thira.

Santorini beaches are all made of lava, meaning they mainly consist of pebbles. Most beaches are quite steep, so the water gets deep quickly.

If you are going swimming, Perissa/Perivolos or Kamari beach are best.

Most of the beaches are situated on the west side of the island. This means there is no access to a beach if you plan on walking from Fira or Oia.

Many flock to Oia to glimpse at the beautiful blue dome churches and its amazing sunset.

Also known as Pano Meria, the village is considered the most picturesque of Santorini and holds the position of the most visited spot for sunset viewing. 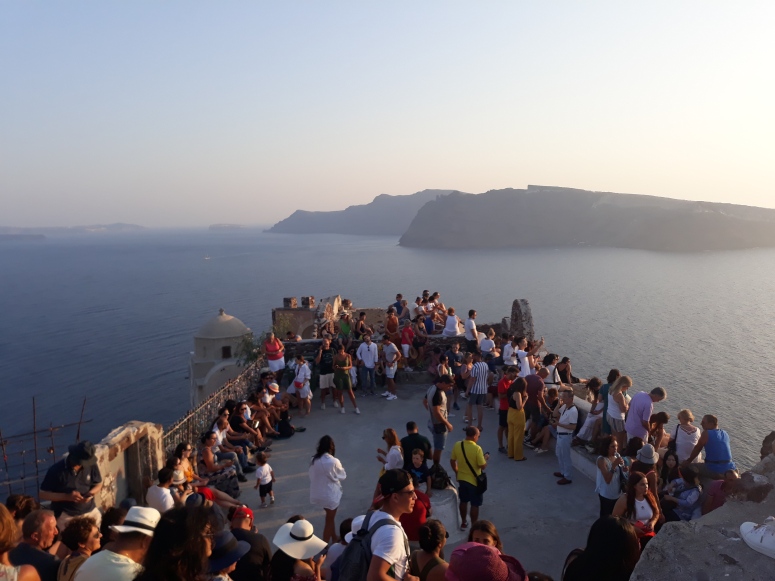 It is on the northwest coast of Santorini and it is built on the caldera slope.

Visit for its charming narrow paths, shops, and galleries.

Tip: Oia is super busy and tourists flock for the sunset. If you’re not that bothered about seeing the sunset, head to the famous blue domes of Oia, which becomes less busy when people go to the other side to see the sun setting.

Santorini has 250 churches. One of the largest churches in Santorini lies in the central square of Perissa, the church of Holy Cross.

On the slopes of Mesa Vouno mountain, built on an enormous rock, is the tiny, white washed chapel of Panagia Katefiani, from where you can enjoy wonderful views. 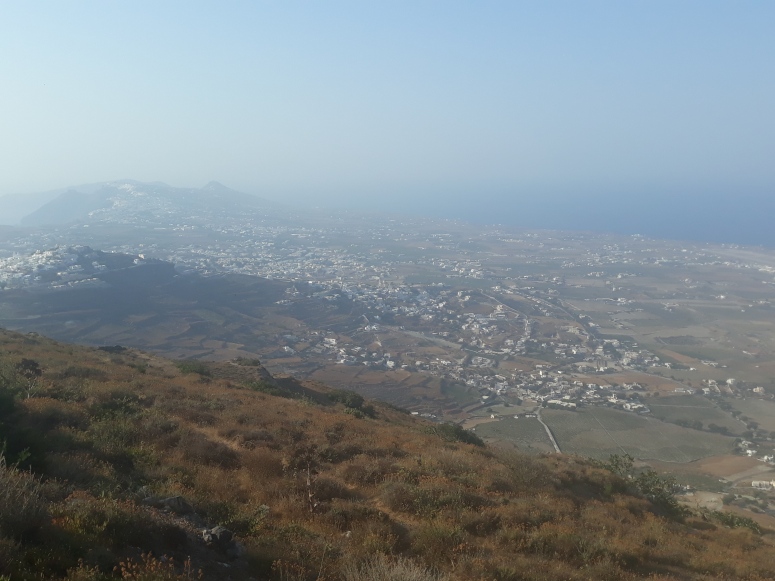 Located next to the famous Red Beach of Akrotiri, you will find a church built into the mountain.

If you’re looking for history and culture, take a trip to the excavations at Akrotiri, which have uncovered one of the most important prehistoric settlements of the Aegean.

The first habitation at the site dates from the Late Neolithic times. During the Early Bronze Age, a sizeable settlement was founded and in the Middle and early Late Bronze Age it was extended and gradually developed into one of the main urban centres and ports of the Aegean.

Akrotiri was in contact with Crete but also communicated with the Greek Mainland, Cyprus, Syria and Egypt.

In the last quarter of the 17th century BC, the inhabitants fled due to severe earthquakes.

The former capital of Santorini, Pyrgos is the best-preserved medieval settlement on the island. 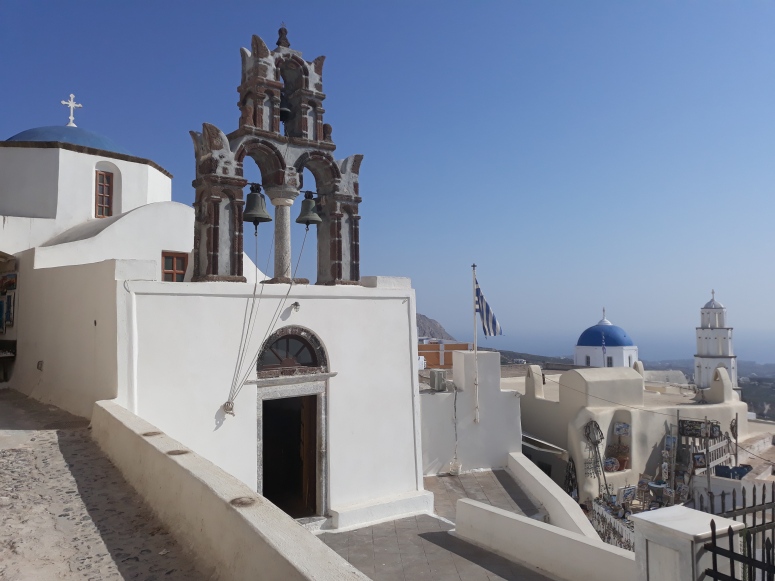 It enjoys panoramic views as it is built in the heart of the pre-volcanic hinterland and at the foot of Mt Profitis Ilias.

Pyrgos is a typical fortress settlement of the Cyclades and on the hilltop, you can find ruins of Kasteli Castle, one of the five ‘kastelia’ on the island. 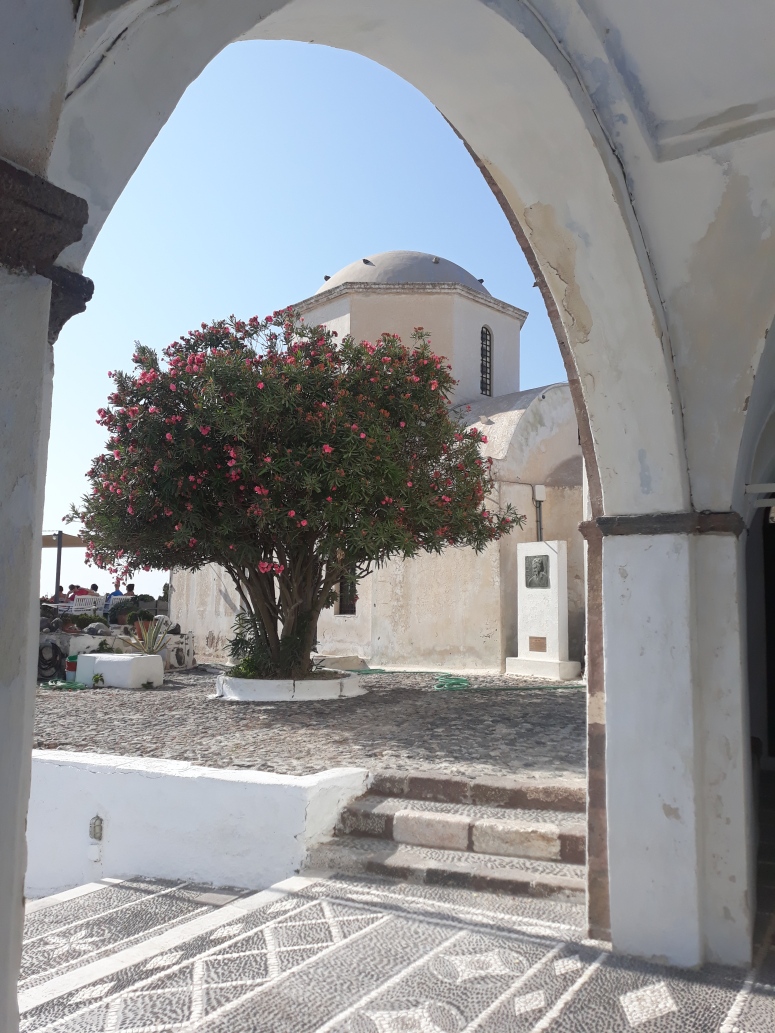 During Good Friday, the whole hillside is lit up with burning fire brands.

The largest village is Santorini, Emporio is situated at the centre of the south part of the island and built in the lowlands, at the foot of Profitis Ilias Mountain.

The village holds splendid blue-domed churches and tiny chapels, among them is the church of Agios Nikolaos Marmaritis, which is made of marble.

This village also has the smallest café in Santorini, which has about six tables.

Visit here for the narrow and maze-like paths, which helped to deter piracy.

Where best to stay

If you plan on enjoying the nightlife, Fira is the best place to head. However, if you want a beach holiday, staying in Perissa/Perivolos or Kamari is best. For views, stay in Oia.

We stayed in Hotel Santa Elena, Kamari for several reasons. First, the south is obviously cheaper as it’s away from the money-shot photos and thus, it is less busy. 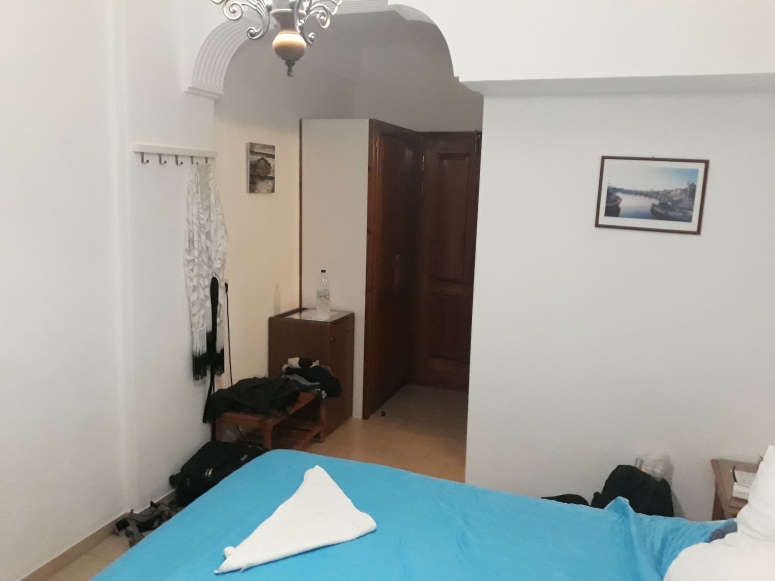 Secondly, we were close to Kamari Beach, meaning we could sightsee the island and when we fancied, take a dip in the ocean upon our return to the hotel. When we got cold from the sea, we changed to our hotel pool which was lovely and warm. 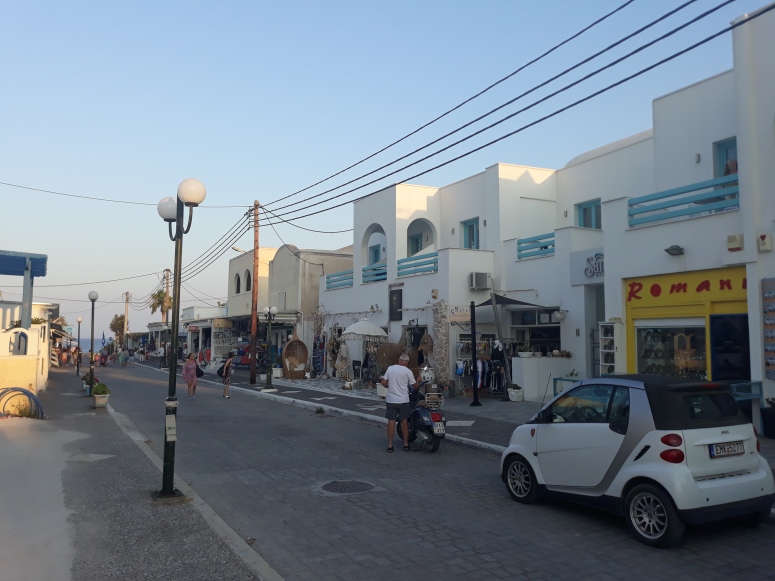 Thirdly, Kamari is a good location to catch buses going to locations such as Fira and Pyrgos.

If you wish to stay in the north of the island, staying in one of the four towns (Fira, Oia, Imerovigli, and Firostafani) is best for great views of the sunset, volcano and caldera.

Things to note: Bear in mind though that these hotels can be very expensive. Also, while you get amazing views and a pool/ infinity pools, remember that there is no beach. All hotels offer a pool or jacuzzi because the beach is inaccessible.

Additionally, you might want to think about privacy. As we walked through Fira’s corridors among the hotels, we were literally right next to people in their pools. Great if you’re an extrovert… not so great if you like to keep private.

If you like fun in the sun, May to October has lots of sunny weather, with July and August being the hottest months. As this is peak time, costs do go up.

High season in Santorini runs from late June until early September, so it’s advised to book hotels far in advance for these months. For popular hotels, book between 6-9 months before you visit.

In the winter, the island gets very windy.