Whether walking through Old Town’s snaking alleyways or visiting the oldest surviving church, this Georgian capital offers both a rich history and charm

Predicted to become increasingly popular over the next couple of years, Tbilisi is a Caucasus jewel that is centuries old, yet vibrant and diverse.

From the Mtkvari River to Rustaveli Avenue and Freedom Square, this capital city offers eclectic architecture, old town vibes and a bustling center.

Flying: Flights will mostly land in Tbilisi or Kutaisi airport. To get from Tbilisi airport to the city center, take bus 37. This stops at Liberty Square and the central train station. A single ticket costs 0,50 lari (€0,17) and can be purchased onboard.

Bus: You can purchase a shuttle bus ticket from Baku, Azerbaijan that lasts 10 hours and costs US$7 (12 manat). Tickets can be bought in the ticket office at the train station.

From Yerevan, Armenia, you can catch a bus the bus station (6 Admirala Isakova ave) that takes you to Tbilisi’s bus station (Ortachala, 1 Gulia str). The journey time takes around 6hrs 30mins and costs $19 (54 GEL). Click here for the bus schedule.

Train: You can reach the city via a night train from Baku or Yerevan. Tbilisi-Baku trains are operated by Azerbaijan Railways and Tbilisi-Yerevan trains are run by South-Caucasus Railway.

Carriages are standardised and you can buy varying tickets: SV (Spalniy Vagon) is a sleeping 2-bed-compartment, Kupe is a sleeping car with 4-beds and Platscart is economy with multiple people.

TIP: Click here for the Tbilisi-Yerevan Train. Note that there are tickets for odd and even days, so make sure these dates will match up with the rest of your holiday.

City buses travel around the town and run from 7am-12pm. A ticket costs 40 Tetri.

Bus no 37 from the airport takes you to the city’s centre. This service stops at 11pm.

The city also offers a minibus service that you can catch from most locations apart from Chavchavadze Ave, Melikishvili St, Rustaveli Ave and Freedom Sq.

There’s a metro with two lines. The system runs on a token system, which you can buy from the cashiers at the station. A trip costs 40 Tetri. Change the line at Vagzlis moedani station.

TIP: Travelling from the airport to the central railway station takes 25 minutes and costs 2 GEL

TIP: Taxis are a good way to explore the city quickly. Prices range from 50-70 Tetri but make sure to negotiate prices before getting in the taxi

One of the tallest Eastern Orthodox cathedrals in the world, the cathedral complex integrates nine chapels has had various supplementary buildings and gardens.

Built in 2004 with a modern twist, it contains materials from holy spots, such as rocks from the Sion Mountain and the Jordan River and soil from Jerusalem. 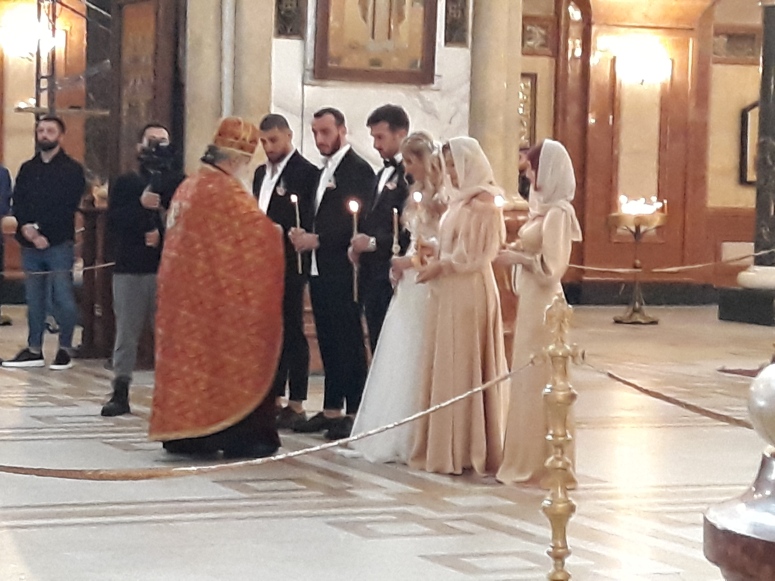 TIP: The stairs takes you up to the cathedral, from where you an amazing view over the premises and Tbilisi.

Known for its sulphuric baths, the neighborhood is located at the eastern bank of the Mtkvari River and according to the legend, the King of Iberia’s falcon fell, leading to a discovery of the hot springs, founding a new capital.#

Sulfur baths are booked by the hour for a flat rate and other treatments are added on for an extra cost.

Entry cost: Varies depending on treatment but a private room costs around 80 GEL. A massage costs around 10 GEL.

This bow-shaped pedestrian bridge located in downtown Tbilisi, is made out of iron and glass and illuminated with numerous LEDs. 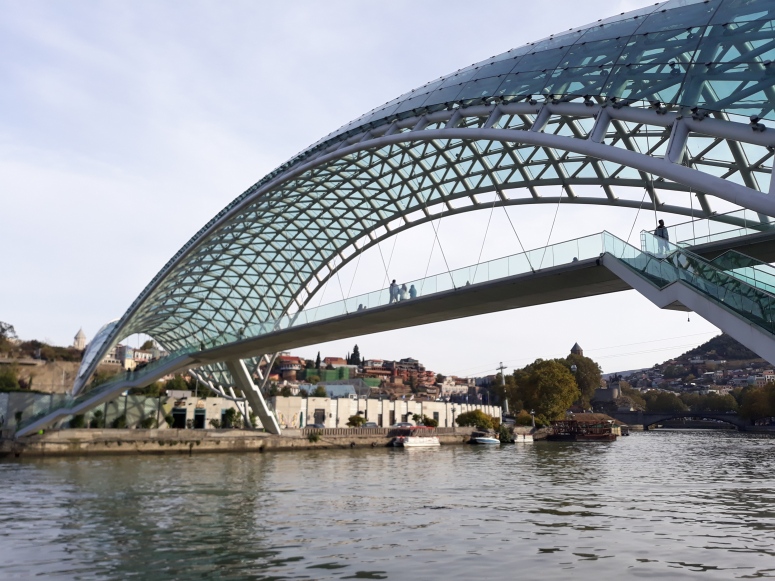 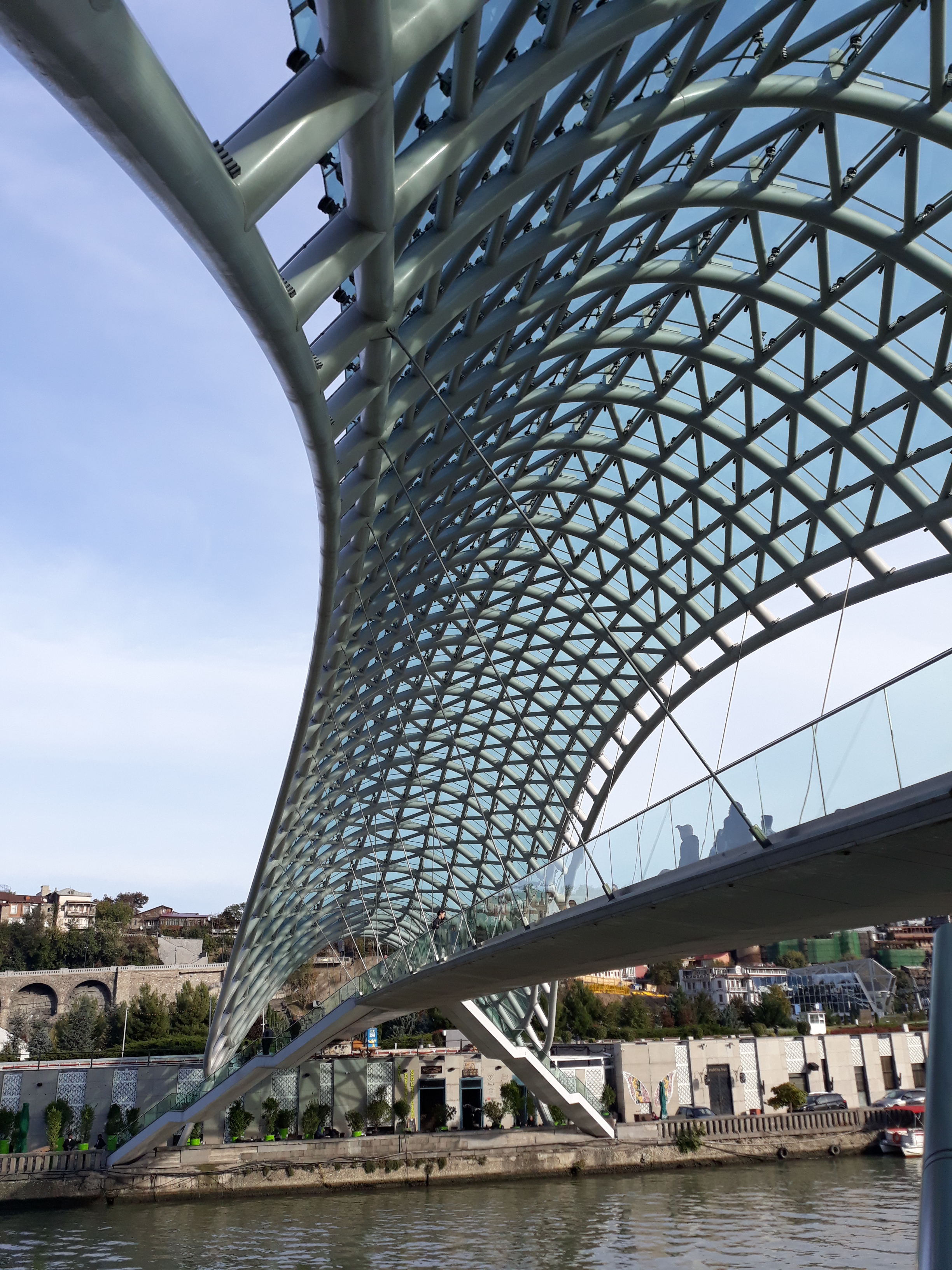 The bridge provides a unique view of the Metekhi Church and Narikala Fortress on one side, and Baratashvili Bridge and the presidential residence on the other. 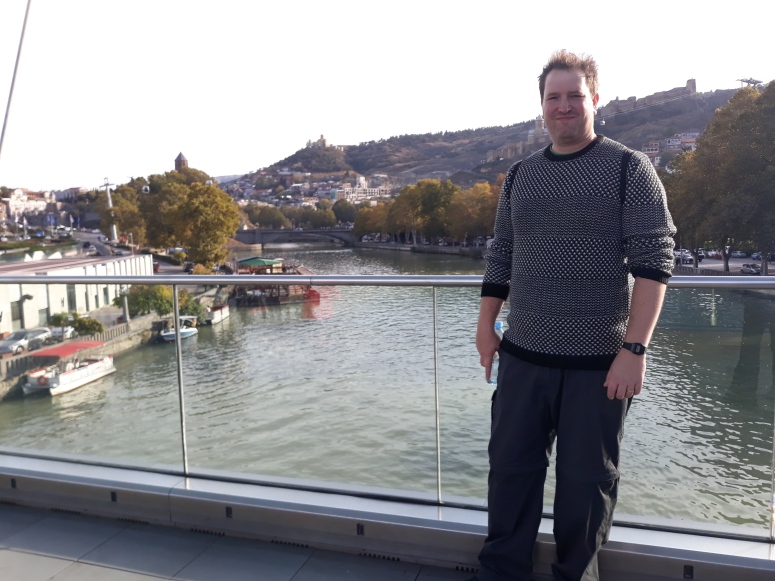 Located in Old Tbilisi, the cathedral is home to the sacred cross of St Nino, the patron saint of Georgia. According to legend, the cross was made of grapevine branches connected with each other by Saint Nino’s own hair.

Inside, the cathedral is decorated with frescoes and icons in gold and dark turquoise colors. Doors and marble doorways are decorated with winding grapevine patterns. 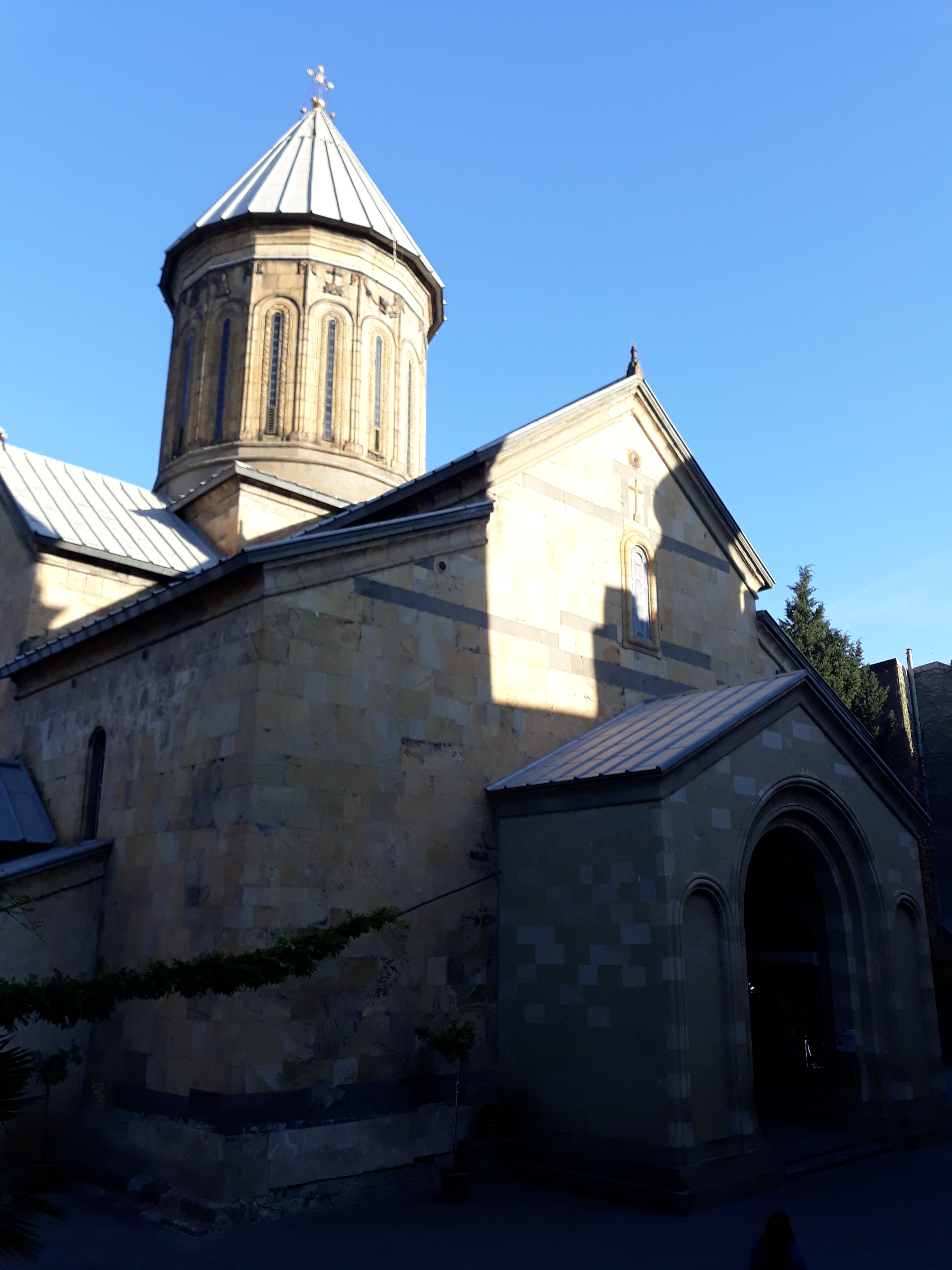 The church dates back to the 6th century and was renovated in the 13th century. 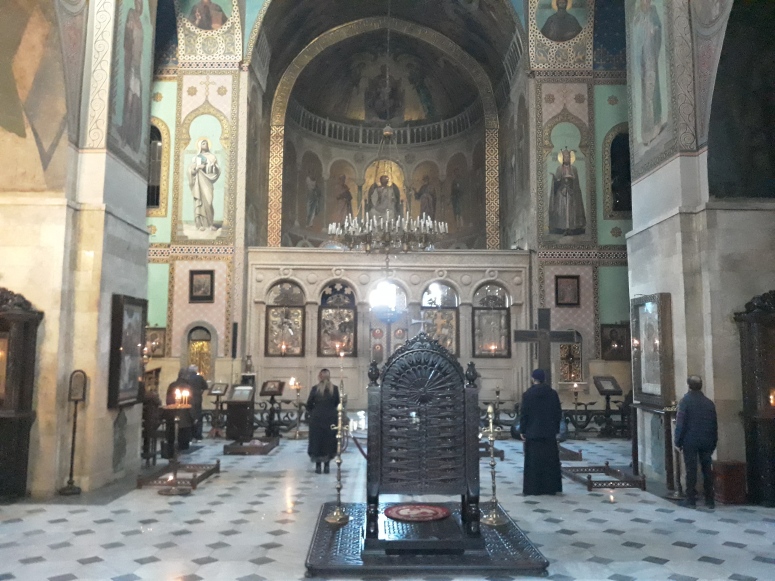 Opening hours: Open daily with services at 4:00pm on Saturday.

The oldest surviving church in Tbilisi, it belongs to the Georgian Orthodox Church and dates from the 6th century.

Located on Shavtelidze Street, the king of Iberia stands proudly in the church as a testament to Georgia’s long history.

The icon of Christ was moved from Ancha monastery (in Klarjeti) to Tbilisi. One of the greatest relics in Georgia, it was preserved at the Basilica until the 19th century. It now resides in the Art Museum of Georgia as one of the oldest relics there.

Located in Tbilisi’s center, Liberty Square or Freedom Square represents the main value and a spirit of Georgian people.

The square contains a 40m tall monument depicting freedom and victory. At the top of the monument, there is a golden statue of St George slaying the dragon. 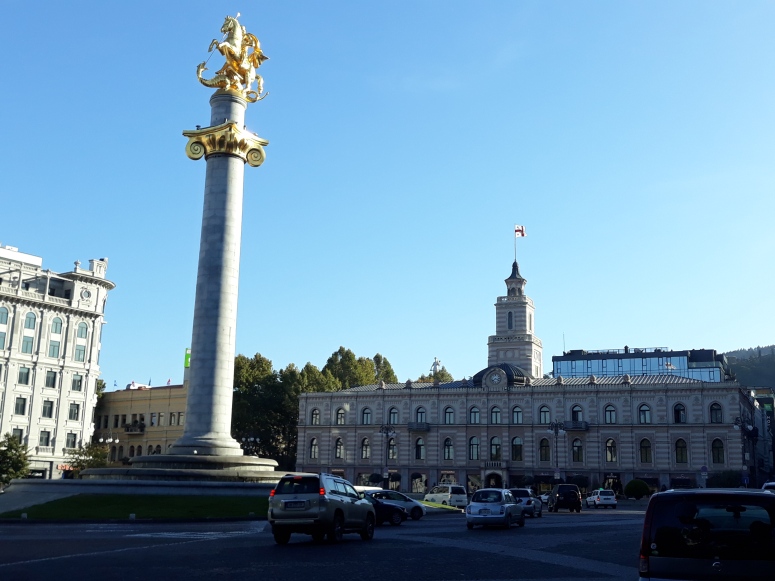 Tbilisi City Hall is also situated on the square.

Connecting Rike Park on the left bank of the Mtkvari river with Narikala Fortress, the cable car was open in 2012 and offers a 360-degree views of the city.

When arriving at the top of the hill, you can turn left to the Narikala Fortress or right to see the Kartlis Deda (Mother of Georgia) statue. 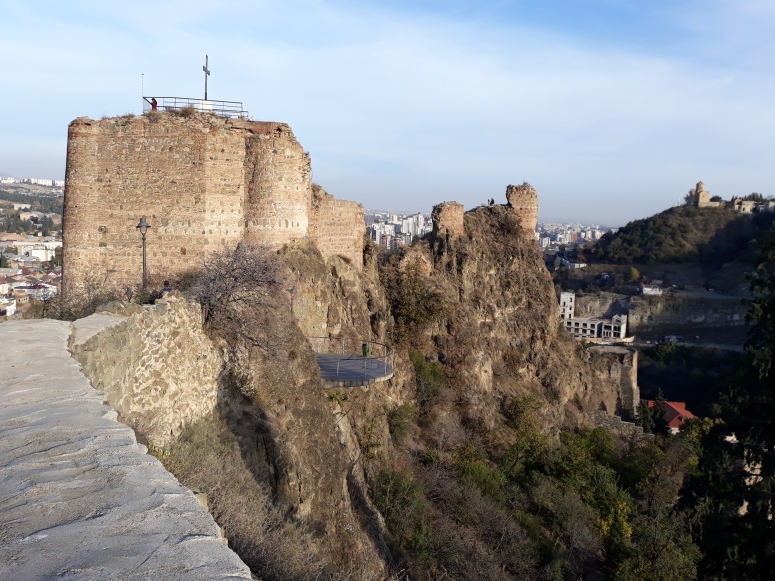 TIP: If you’re not scared of heights, wait for the five people car as this has a glass floor.

This 20m-tall aluminum symbol holds a sword in one hand and a bowl of wine in the other.

Welcoming friends and turning away enemies, the statue stands on top of Sololaki hill and was constructed in 1958. You can reach the statue via the cable car.

Built and rebuilt, the Old Town offers everything from ancient churches and tiny shops to famous 19th century houses with wooden balconies and winding back alleyways.

The Metekhi Virgin Mary Assumption Church is located on the left bank of the Mtkvari river, on Metekhi Cliff, in the Avlabari neighbourhood, opposite the old town of Tbilisi.

TIP: Ladies are required to wear scarves in Georgian orthodox churches and sometimes skirts too, which can normally be found at the building’s entrance. Short trousers are forbidden in the church.

The Chronicle of Georgia

Located on a hill near Tbilisi Reservoir, this Historical Memorial of Georgia was created by Zurab Tsereteli, a Georgian-Russian sculptor and architect. The memorial was erected in order to celebrate 3,000 years of Georgian sovereignty and 2,000 years of Christianity in the country.